I’ve been taking part in some online discussions about the upcoming “Air Tattoo” at Ohakea next month. Mostly they centre around how horrible traffic is going to be in light of the disaster that was the 2012 event. At this stage, I’ve decided I’m not going. While it’s “on my doorstep” and relatively easy to get to, I’m just not keen on sitting in traffic and missing the show and having to pay for a ticket ahead of time for the privilege.

Meanwhile, I’ve been doubling down on the task of scanning my father’s entire negative collection and after reaching 110 films complete, I thought I’d treat myself by scanning some of my own photos taken in my SLR days between 1986 and 2005. How ironic, then, that as I pulled some films off the top of a pile, I should come across four from the 1998 Ohakea Open Day.

I’ve scanned in 98 shots but as these were taken in my manual focus days and are old, they’re not great quality so I have chosen only half a dozen to clean up and publish. Those chosen represent what is unlikely to be repeated in the future – in some cases retired types, in others, present in significant numbers or different colours.

First up is Royal Australian Air Force (RAAF) Boeing 707-300, A20-629. This type has now been retired from the RAAF for eight and a half years, replaced with the Airbus A330 MRT type. 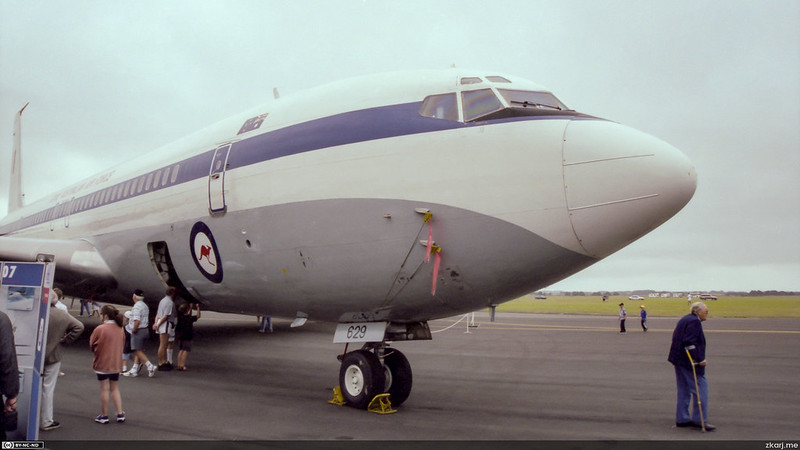 It’s quite likely all of these types will be seen at this year’s Ohakea event, even the Republic of Singapore Air Force (RSAF) Hercules, ‘733’, is a possible return visitor. However, you’ll not see a Royal New Zealand Air Force (RNZAF) P-3K Orion in this colour scheme! It was interesting to note that NZ4206, which did the air display in 1998 was in the now standard all over grey scheme while NZ4202, seen here, still wore the older scheme. In the foreground is Beechcraft Super King Air B200, NZ1883, which was fairly new (to the RNZAF) at the time. Technically, you won’t see this aircraft at the show this year, because in 2012 the fleet was returned to their lessor and newer airframes were leased, albeit (unusually, I think) under the same operational serials. 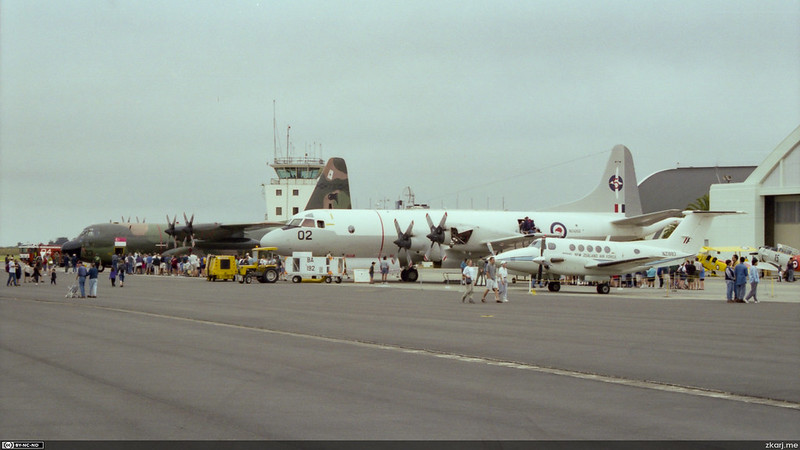 Not much time was left for this little beauty, as the Air Combat Wing would be disbanded only three and a half years later. Aermacchi MB.339C, NZ6469 taxies in after performing in a spirited 5-ship formation display. 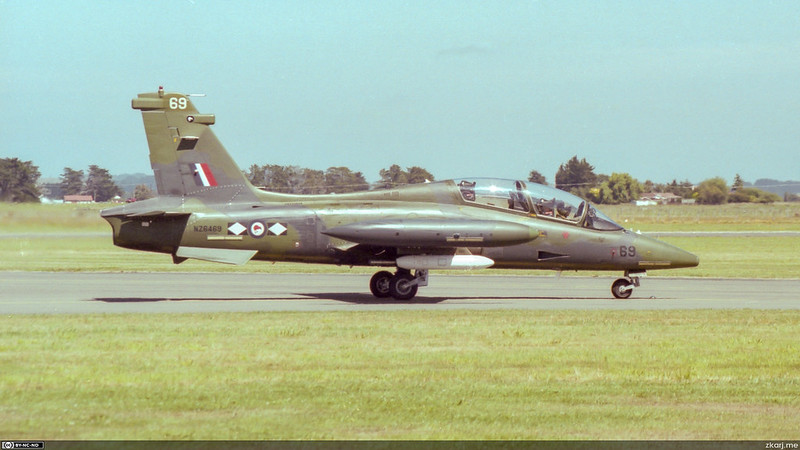 Subject to the same fate, the venerable T/A-4K Skyhawk, NZ6255, taxies out for a display. Note it is carrying a “buddy” refuelling tank. My photos do not show whether this was used in the world famous “plugged barrel roll” but at the very least I am sure there would have been a simple flight refuelling demonstration. 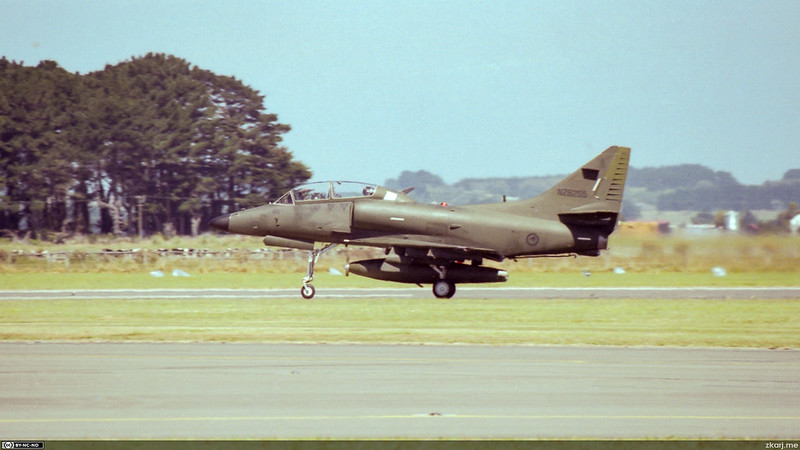 There is every chance you will see RAAF F/A-18s perform at Ohakea in 2017, but in recent years – with no RNZAF jets to “play with” – the Aussies have tended not to display more than a solo aircraft. There were no less than eight present on this occasion, and this four-ship display was impressive. 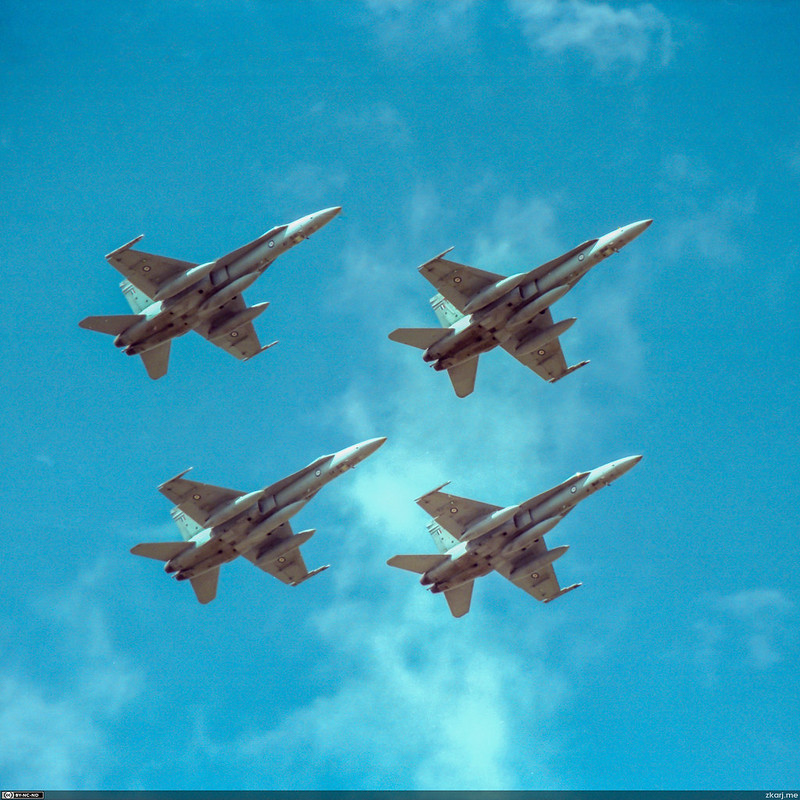 Finally, another study of the soon to be gone Skyhawks, although in this case two A-4Ks, NZ6201 and NZ6202, depart for a display. I miss these showing up at air shows. Some of my fondest memories are of “doing the Linda Blair” trying to figure out when these little rockets were going to try and surprise the audience, often arriving from all four points of the compass at once! 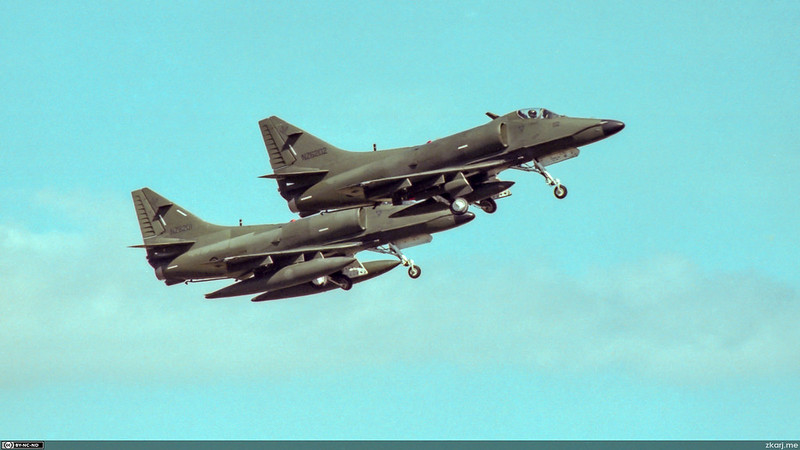 And that’s it. A bit of nostalgia. I must have a whole bunch more photos around my study that I will get to scanning in time (I must concentrate on Dad’s first, though) so no doubt there will be some more gems to come in the future.