Why is this site branded as “ZKARJ”?

Well, because ZK-ARJ is the registration of a particular New Zealand-based De Havilland Tiger Moth which has a special significance for me.

You can read all about the history of Tiger Moths in New Zealand in the book New Zealand Tiger Moths, 1938 to 2000 by Cliff Jenks and David Phillips and published by The Aviation Historical Society of New Zealand.

Below is a story adapted from the book with the kind permission of the AHSNZ. It is a little long, even in this abridged form, but ZK-ARJ’s story is a long and interesting one and a taste of most aspects of Tiger Moth history in New Zealand.

Tiger Moth serial number 3357 was produced at the new De Havilland factory at Hatfield in mid-1935, the 183rd production DH.82A. On 29 July 1935, it was registered as G-ADLU to the London Aeroplane Club.

In late 1939 or early 1940, together with seven other London Aeroplane Club machines, ADLU was shipped to New Zealand for the RNZAF. On 12 July 1940, No 3357 was brought on RNZAF charge at Rongotai, being assigned the serial number NZ735.

It is likely that it served at Harewood from the outset of its military career, being in use at there up to at least October 1944. On 22 January 1948, the Tiger Moth was issued, free of charge, to the South Canterbury Aero Club.

The South Canterbury Aero Club, based at Timaru, registered the aircraft on 20 February 1948 as ZK-ARJ. No 3357 had settled down to a civilian career again, and pleasure flying and the inevitable pilot training were the order of the day.

ARJ was also used as a glider tug, pioneered rabbit poisoning, and carried out aerial photography of local farms. It was also contracted under the ATC cadet scheme to give subsidised flying instruction to cadets.

On 30 June 1950, when ARJ’s Certificate of Airworthiness was to expire, the Club decided to reduce its fleet – at a time when Tiger Moths were being sought after for the embryonic topdressing industry. ARJ was the aircraft chosen to be sold.

From 24 July 1950, the aircraft was registered to Southland Aerial Fertilisers Ltd. Meanwhile, a hopper was fitted to ARJ at Rongotai and the Certificate of Airworthiness was amended to reflect the new role; No 3357 was about to embark on the most testing period of her eventful life.

Southland Aerial Fertilisers owner C.W. (Bill) Hewett, a well-known pilot in Otago and Southland, began operations with ARJ at Lorna Gorge, between Winton and Gore, on 19 July 1950. That first day he sowed 20 tons of fertiliser – the first commercial aerial topdressing in Otago. The topdressing industry was perhaps even harder on Tiger Moths than ab initio pilot training, and during this period ARJ suffered six accidents including engine failures and collisions with ground obstructions, often one the result of the other. Nevertheless, ARJ soldiered on.

By 1956, many firms had begun to replace Tiger Moths with more modern types. So the decision to retire ARJ was taken, and it was back to aero club pastures again.

The new owners were the Hokitika Aero Club, ARJ being their first – and only – aircraft. The transaction taking place about August or September 1957.

Life on the West Coast was a far cry from lugging loads of super around the deep south, and ARJ once more settled into the round of training and pleasure flights.

On 13 June 1961 ARJ was sold to the ”Mathewson Brothers” of ”Taieriside”, Kokonga, Central Otago. Here, ARJ was used simply for private flying around the farm, but such gentle pursuits were not to last long, and new fields were waiting to be conquered.

In 1962 the recently formed Wigram Gliding Club were looking for an aircraft to tow their gliders aloft, and ARJ’s ’for sale’ status came to their attention. On 30 January 1962, No 3357 embarked on a new phase of her career. The Wigram Club made good use of ARJ, but eventually purchased a Piper Super Cub and ARJ’s gliding club days were about to close.

Languishing in the corner of the Club’s hangar, ARJ caught the eye of a couple of visiting RNZAF flying instructors and the seeds were sown for the formation of the Tiger Syndicate; ownership was transferred on 14 October 1966.

The Tiger Syndicate comprised eight instructors from the RNZAF’s Pilot Training Squadron at Wigram who, during the week, trained RNZAF student pilots. ARJ was thus largely a weekend-only machine. Still based at Wigram, ARJ was now frequently involved in giving rides to friends and families of the Syndicate members, not to mention standing in for Santa Claus’s sleigh on his annual visit to Wigram.

On 5 November 1967, a pageant was held at Wigram to commemorate 50 years of flying from the airfield. One of the items was the Rothmans Vintage Air Race, and the Syndicate entered ARJ; it came in a creditable third to Gipsy Moth ZK-AEJ and Tiger Moth ZK-BRM. The same day, negotiations for the sale of ARJ began, the Syndicate finding it more and more difficult to operate as routine postings of its RNZAF members occurred. The sale took place three weeks later.

The new owners were another syndicate, comprising Messrs D.G. Waters and A.J.L. MacDonald. Based at Taieri, ARJ now became a maid of all work. Glider towing again became a major task. The owners were also keen outdoor men, and ARJ flew into many of the small strips and paddocks throughout Otago, Southland, Westland and Fiordland. Mr MacDonald ran a construction business, and he often used ARJ, ”loaded to the brim”, to fly into remote building sites.
While based at Taieri, ARJ suffered one of its most serious accidents since its topdressing days. While taxiing for takeoff, ARJ collided with a tractor that was pulling the grass mowers on the airfield. The tractor driver was slightly injured and – according to the records of the Office of Air Accident Investigation – ARJ was written off. In fact, the damage was not so major as to cut short the career of such an old campaigner as No 3357.

The damaged aircraft was sold to Mr I.A.T. Strathern of Hamilton on 4 November 1971. Mr Strathern apparently purchased ARJ under insurance arrangements, and for some years the Tiger Moth lay derelict, first out in the open, later in a dismantled condition in the back of a hangar at Ardmore.

In 1979, two owners appeared who were to breathe life back into one of New Zealand’s most interesting Tiger Moths and to set it on possibly its final (and, to be hoped, longest) New Zealand chapter.

Mr C.N. and Mrs C.J.Bellingham of Waiuku became the registered owners on 20 March 1979, and the restoration of ARJ to airworthy status got underway at the Bellingham’s farm. When the farm was sold, the rebuild was held up for a year while a hangar was constructed at the new property at Patumahoe. The fuselage was moved into a bedroom in the new farmhouse, where work on it could continue pending completion of the hangar.

At the beginning of 1981, the Bellingham’s learned of the fly-in at Hastings, planned for Queen’s Birthday weekend that year, to mark the Tiger Moth’s 50th anniversary year. With this incentive, the rebuild was speeded up, and Cliff Bellingham test flew ARJ on 16 May. With a couple of weeks for the bugs to be sorted out, ARJ made it to Hastings, where it was the oldest Tiger Moth present and the only one of prewar vintage.

ARJ led a sedate life with the Bellinghams, flying only about 200 hours over the next five and a half years, but in that same period twice picking up the Tiger Club’s annual ”Most Magnificent Moth” award.

Then began a succession of private owners; On 1 August 1986, ARJ was sold to two Auckland businessmen, Messrs A.G.R. Leuschke and G.P. Lock. Nearly two years later, on 21 July 1988, ownership passed to P.E. Carpenter, also of Auckland. He and Captain Norm Bartle set up a joy-riding operation, using ARJ based out of Ardmore. The venture with ARJ did not last long, for just over a year later, on 24 July 1989, it was registered in the name of the ”Tiger A R J Syndicate”, of whom John Greville was a member. ARJ was still based in Auckland.

This flitting around like a moth ceased when, on 13 August 1992, ARJ was registered to the Rimmington Family Trust, and ARJ moved to Hamilton. Earlier in 1992, Russ Rimmington – who was not a pilot – met a flying instructor who extolled the virtues of Tiger Moths. The disease took hold, and Russ soon afterwards purchased ARJ and learned to fly in it. Since then he has used it to travel extensively around New Zealand. Russ was a member of the New Zealand National Fieldays Society and ARJ has appeared at opening ceremonies. Russ Rimmington was elected Mayor of Hamilton in October 1998. He has a dairy farm at Tamahere, just south of Hamilton, and the farm now includes an aircraft hangar and an airstrip for ARJ.

Cliff Jenks, co-author of the book, is also my father — and a former RNZAF flying instructor and leading member of the Tiger Syndicate. ZK-ARJ was sold by the Tiger Syndicate a little more than a year prior to my birth. The ’J’ was a given, and so my first names were duly matched to the ’A’ and ’R’. Thus was I named Allister Ross Jenks; A.R.J. This photo from my father’s collection shows ZK-ARJ landing at Wigram, probably in late 1966, under ownership of the Tiger Syndicate. This photo from my father’s collection shows my grandparents and my sister standing in front of ZK- ARJ at Wigram. 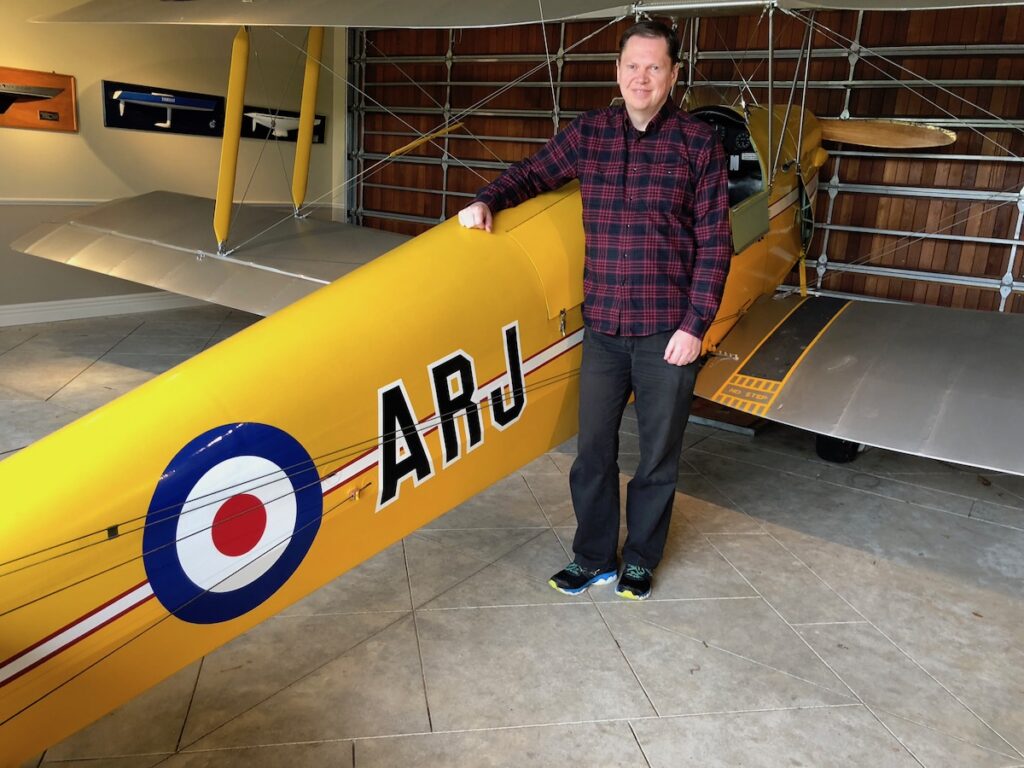 In July 2019 I had the privilege to visit the current owner of ZK-ARJ, Russ Rimmington, near Hamilton. Here’s a picture of me standing with my namesake.