Published by Allister on November 9, 2019

I didn’t realise it at the time, but the pictures I published mid-October of the Singapore Airlines Boeing 777-200ER would be my last of the type at Wellington. Only 9 more flights followed that one before the type was retired from the route.

While it was quite exciting to have such a large aircraft as the 777 flying regularly into Wellington, it’s not the most exciting of shapes. The same cannot be said, however, of its replacement — the Airbus A350-900.

At just over 3 metres (5%) longer and just under 4 metres (6%) wider it’s not a big change in size class, but it is certainly more modern looking with that ‘droop’ nose and the unique curves of the blended winglets.

I was there to watch the arrival of the first flight on 1st November, so I was able to capture the water cannon salute.

No doubt I will capture many more of this lovely aircraft in the coming months and years.

I also took the opportunity to capture some other types that were operating around the same time, including my first pictures of an A320neo. I didn’t even realise it at the time!

You can check out the complete set of 28 pictures from the visit over on Flickr.

Aside from my extensive remastering work this year (over 500 photos remastered up to this point!) I have only made a handful of visits to Wellington International Airport since the last post on the subject, Read more…

I’ve been enjoying a three week break from work over Christmas and New Year, but only managed to get in a trip to the airport with camera and sun on Friday. My chief goal was to Read more… 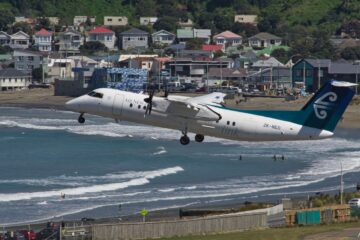 It's been a while since I visited Wellington Airport with the sole purpose of taking photographs, but today was such a day.