June 10th saw myself and a few family members take a trip to Christchurch to visit the Air Force Museum of New Zealand. The trip transpired because we became aware that their 80 Years in 80 Stories exhibition, which features life-size cut-out photographs of RNZAF members over the years, contains one of my father.

It was a great trip and we are especially thankful for the personal attention paid by museum volunteer (and ex-RNZAF member) Don Simms.

The museum is a fantastic place to visit and from what we heard, is only going to get better in the years to come. I didn’t take a whole lot of photos because the conditions were a little tricky, but I have managed to pull together an album of 21 shots on Flickr. Here’s a small taster.

This is probably my second favourite aircraft in the collection. I’ve seen plenty of black and white photographs of Lockheed Hudsons and they’ve never really appealed to me as a design, but seeing one “in the metal,” as it were, has made it grow on me. This is NZ2013.

Next favourite on my list is this beautifully finished example of an Airspeed Oxford, PK286, of the RAF. It sits currently in a newer part of the museum which has a lot more light. A little too much on a stunning Christchurch day.

This Supermarine Spitfire Mk.XVIe is not serialled, but is finished as a RAF 485 (NZ) SQN aircraft. I quite like how the pilot and his parachute are used to give it a little more context.

And finally, the main attraction for us, and obviously my favourite aircraft in the collection. Here’s Bristol 170 Freighter, NZ5903, that Dad will have flown many times. 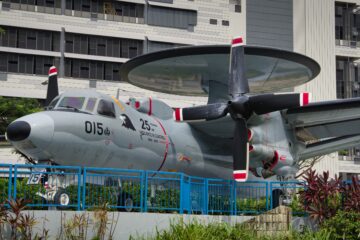 A recent two week holiday included a week in Singapore. I took the opportunity on one of the last days there to pay a visit to The Air Force Museum at Paya Lebar Air Base, one of many homes of the Republic of Singapore Air Force (RSAF).